What is a Magnetic Contactor?-Principle, Types, Advantages

A magnetic contactor is a device that is powered by magnetism. Used to open and close the contacts in the motor control circuit, may also be called a magnetic switch or a contactor.

It is a device that is very often used in industry. Commercial, large industries are very much dependent on this device. Through it, we can easily control heavy loads such as high-capacity motors.

Basically, a magnetic contactor works on the same principle as a relay, connecting and disconnecting electricity. The actuators are similar, this device uses a coil, which when an electrified coil creates a magnetic field.

When an electric current flows to the magnetic field coil located in the center leg of the coil core. This will create a magnetic contactor in which the magnetic field forces overcome the spring force to cause the steel core to move down in this state (ON).

Two sets of contactors will change the operating condition,

The major structure of the magnetic contactor

The basic elements of magnetic contactors are as follows. 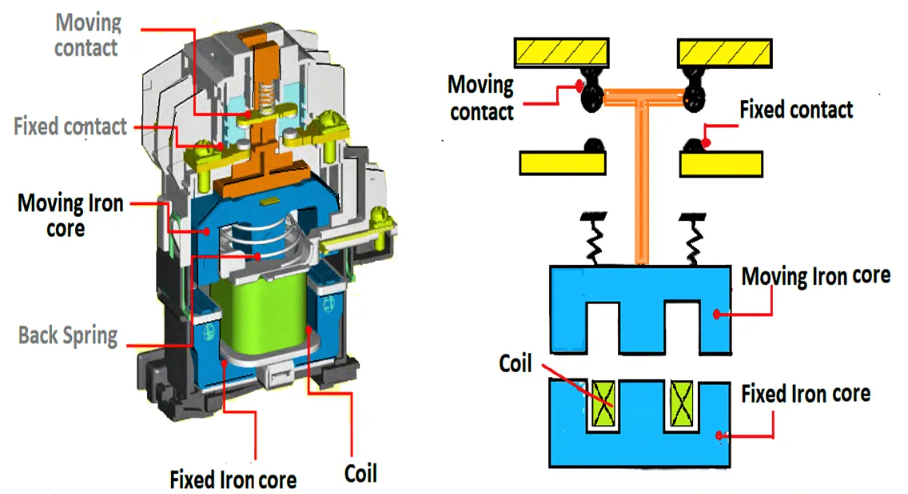 The iron core is divided into two parts:

It becomes an electromagnet when the coil is energized.

When the coil gets energized, a magnetic contactor is closed and it makes the moving core slide into the fixed core.

The coil is powered to pull the main contacts close, auxiliary contacts use the power of that coil to operate.

There are mainly two types available.

The main contact also known as “the main Contact”, is used in the power circuit to connect the electrical system to the load.

Auxiliary Contact is used with the “auxiliary contact control circuit” as a secondary switching. The contacts may be normally open (NO) or normally close (NC). Normally open are open when the contactor is de-energized, whereas normally closed are the opposite. The auxiliary contacts are allowed to pass small currents, used to show the status of the main contacts. In other words, it provides an interface to the control system.

Contactors that are used with AC power are divided into 4 types according to the nature of the load and its use is as follows:

AC 1 magnetic contactor -This type of contactor is helpful in resistive loads such as heater and electrical furnace, and non-inductive or slightly inductive loads, which means the load’s power factor lies between 0.95 and 1.

AC 2 magnetic contactor -For starting of slip-ring motors. Suitable for use with retractable loads as a slip ring motor. They mostly prefer high torque current applications.

AC3 magnetic contactor -Suitable for starting and stopping loads at the motor is up to a speed of a squirrel cage motor. This type of contactor can withstand of high current continuously. Example – Elevators, lifts.

The following are the types of DC contactors.

4. Controllable with an automatic device or a remote-control operation is possible.

The following are some of the applications of magnetic contactors.

It is an electrically operated switch (contactor) that comprises motor overload protection. Magnetic motor starters are similar to contactors, additionally, they have an overload attached to them.

Overloads have heaters or electronic overloads, which sense excessive current flow to the motor.

The magnetic motor starter is a magnetic contactor plus overload relay.

It is being used for remote or local switching of relatively large mercury, fluorescent, or tungsten, or even in LED lighting load centralized ON/OFF control.